You are inquiring about DA Valentino.

Orrion Farms is happy to announce the acquisition of all available frozen semen from the legendary show horse and sire DA Valentino!

While we won’t be selling any breedings rights to Valentino initially, we will have many unborn and live foals from our treasured mare collection available for purchase.  Please contact us to see how we can help you get Valentino offspring into your program.

Dominic M, a prominent grandson of legendary stallions DA Valentino and Versace, walks into the Orrion Farms stallion barn, his bright bay coat shining against the golden morning light that sparkles with speckles of dust. His statuesque silhouette is majestically backlit, a silhouette that bears witness to an illustrious group of ancestors who sit behind him. But as the morning light wraps his every curve, one ancestor stands out in this moment: his maternal grandsire and the incomparable breeding phenomenon, DA Valentino.

Like all the other great breeders lured out by Valentino’s intoxicating gifts, we have also been spellbound. In that spirit, we are extraordinarily proud to announce that Orrion Farms has acquired Valentino’s remaining frozen semen bank in its entirety to be used over time on the esteemed Orrion Farms band of mares.

In the eight short years DA Valentino was on this earth, he stole many hearts – judges, breeders, trainers, and everyone in between. Valentino put definition to America’s most quintessential Arabian show horse. His long, illustrious showring career gave us all ample time to fall in love – again, and again, and again. Valentino was shown four times at U.S. Nationals, once at the Canadian Nationals, and twice at Scottsdale; every time, he entered the ring the favorite, and exited as champion.

But it was as a breeding horse that DA Valentino created a legacy all to his own.

Legendary breeder Sheila Varian once said, “Stallions that embody a look different to either of their parents often are the most significant sires.” Take, for example, Bay El Bey, who looked nothing like his sire, Bay-Abi. Or the great Khemosabi, who did not resemble Amerigo or Jurneeka in the least, but became one of the leading sires of all time by number of registered progeny. The same can be suggested for DA Valentino, who didn’t necessarily borrow the look of one or the other in his pedigree; rather he assembled the quality they all had to offer and put it into one modern, prolific package.

To announce his brilliance in Europe and the Middle East, DA Valentino sent one of his very finest offspring across the pond: his daughter, Donna Molta Bella SRA. She is often referred to as “Golden Girl” because she’s brought home the gold in Las Vegas, Paris, Dubai and Abu Dhabi after taking home roses in Tulsa. Vitorio TO is another son who has indisputably shaped his own legacy. After a slew of wins in both North and South America, Vitorio is now one of the world’s most coveted sires, having earned the title of Leading Halter Sire at the 2019 U.S. Nationals as well as standing in Poland at Michalow Stud, covering some of the finest mares in the world. And what to say about a slew of other important progeny as well? Paragraphs could be written about Valentinos Angel MI, the global chestnut sire Cavalli, U.S. National Champion Mare MD Hibat Allah, two-time National Champion Polidoro FC, and so many others. What is even more breathtaking is the fact that DA Valentino’s breeding career didn’t really even begin until 2007 when he was four. He would only be with us until 2011, but DA Valentino’s siring prowess was already cemented.

The popularity of most breeding stallions peak and weaken while they’re alive, as if to say that they wear out their welcome. Not the case with DA Valentino; people seemingly want more and more of this horse, even nearly a decade after his passing, because he populates not just with beauty, but also a depth of quality to whatever he touches. With each passing year, the demand for what he offers – snaky necks, breathtaking polls, length of leg, and most of all, that hauntingly beautiful presentation – only intensifies.

It begs the question: If DA Valentino has done this much already, imagine what is still ahead? We are ready for a thrilling ride… Valentino-style. 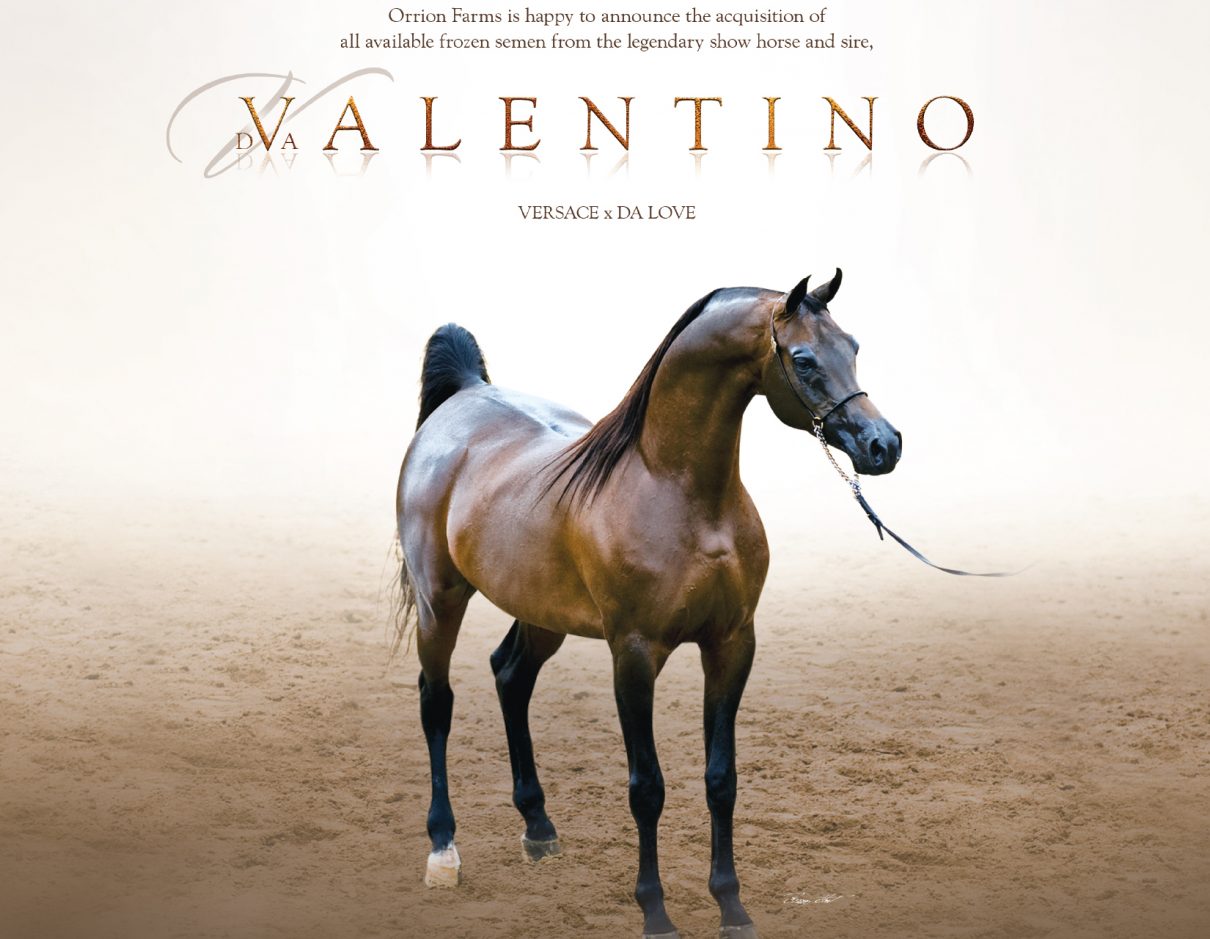 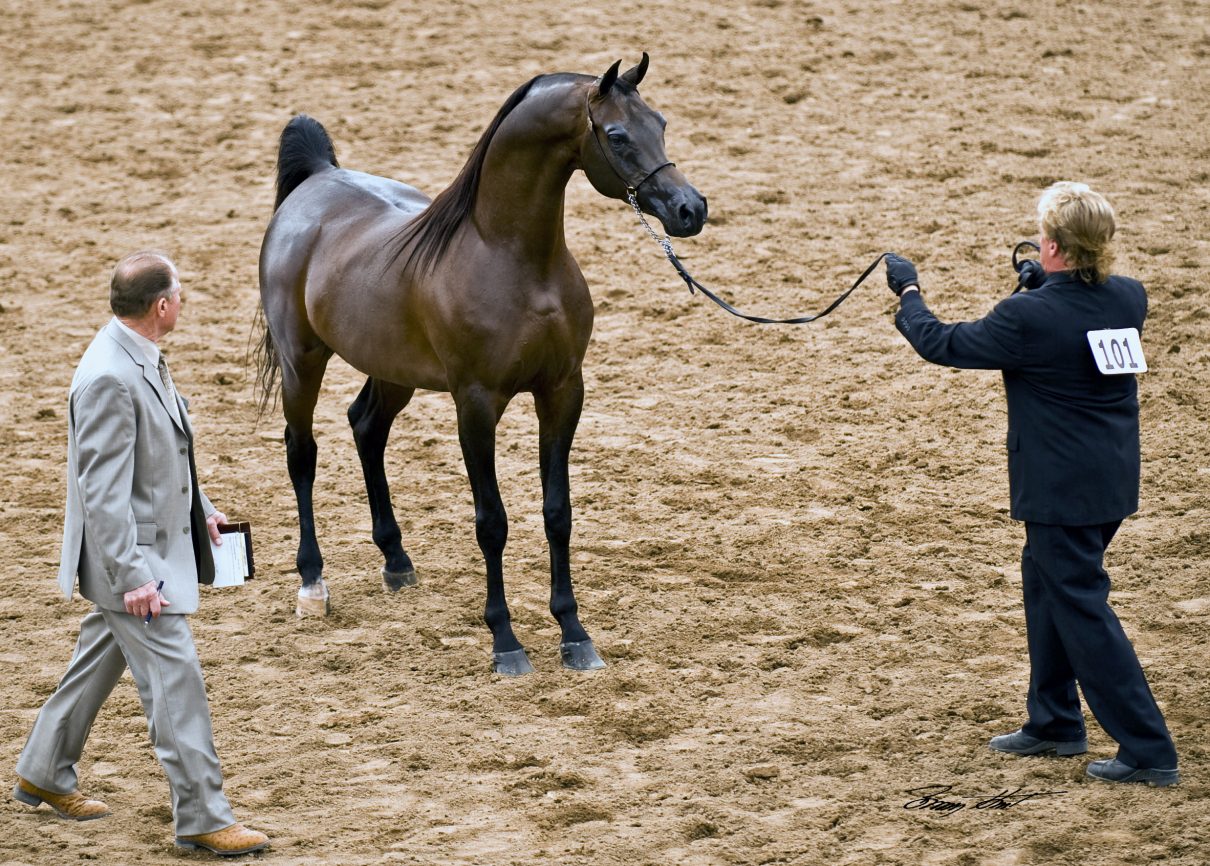 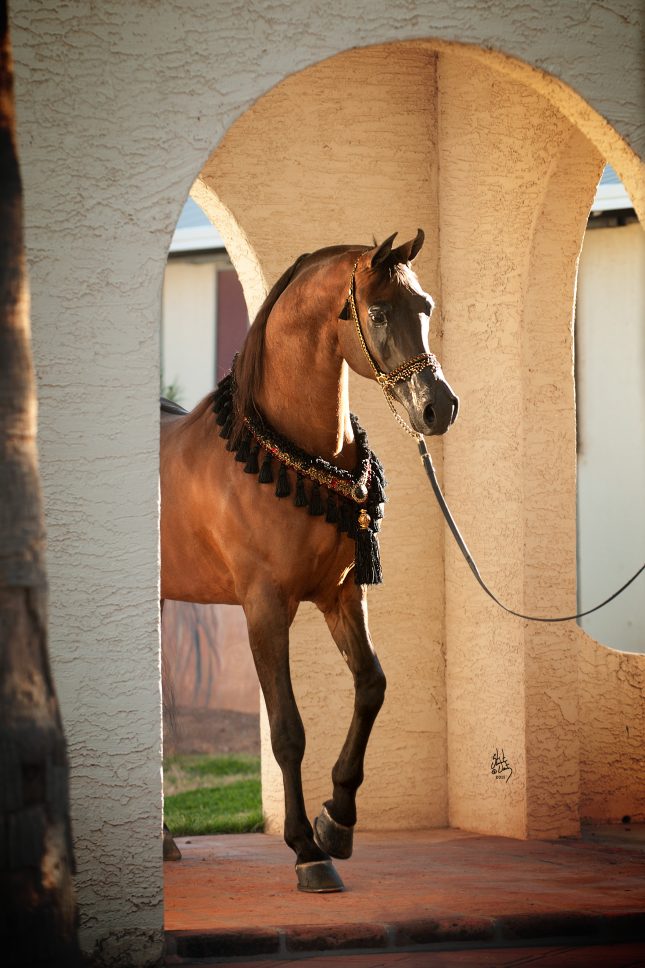 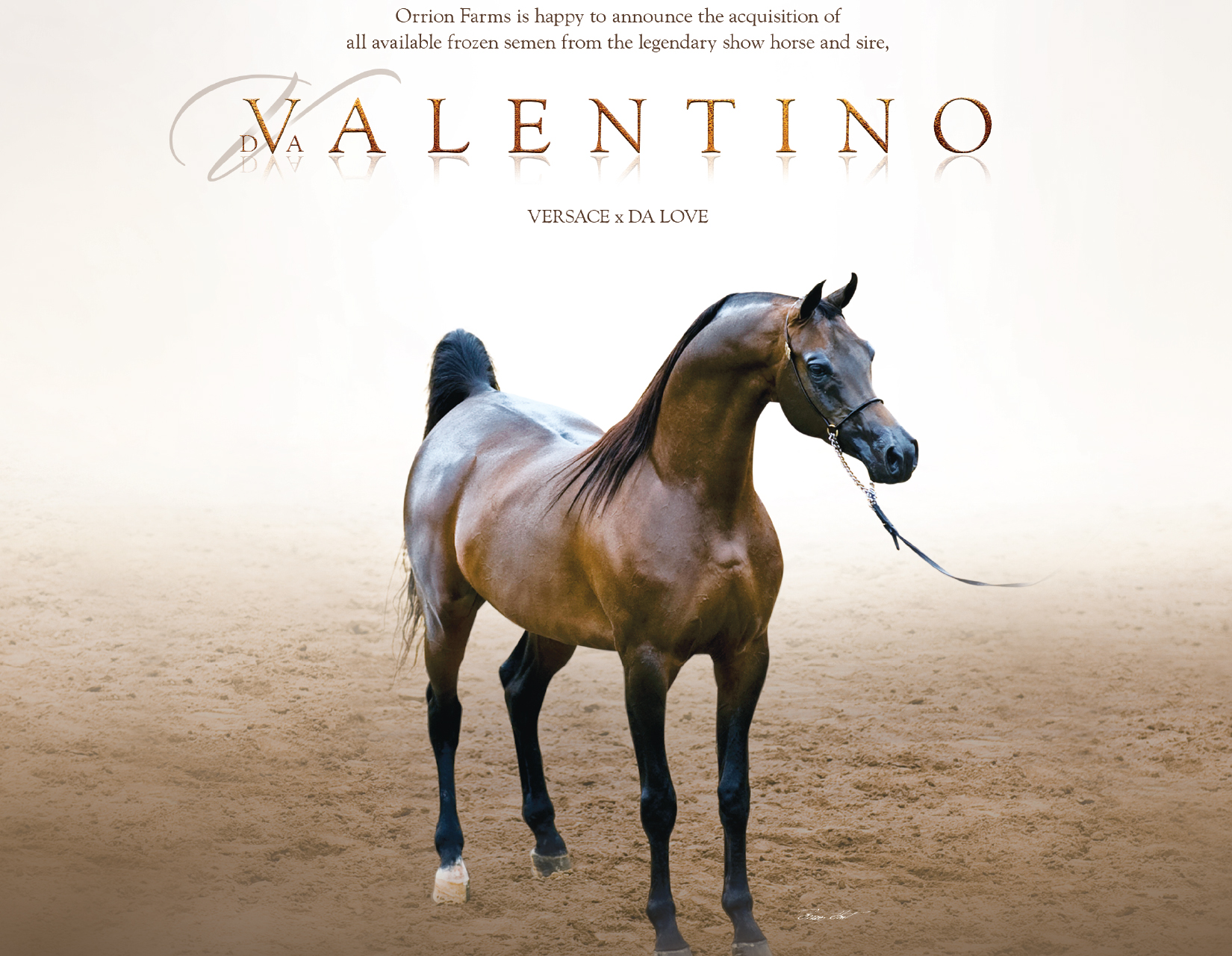 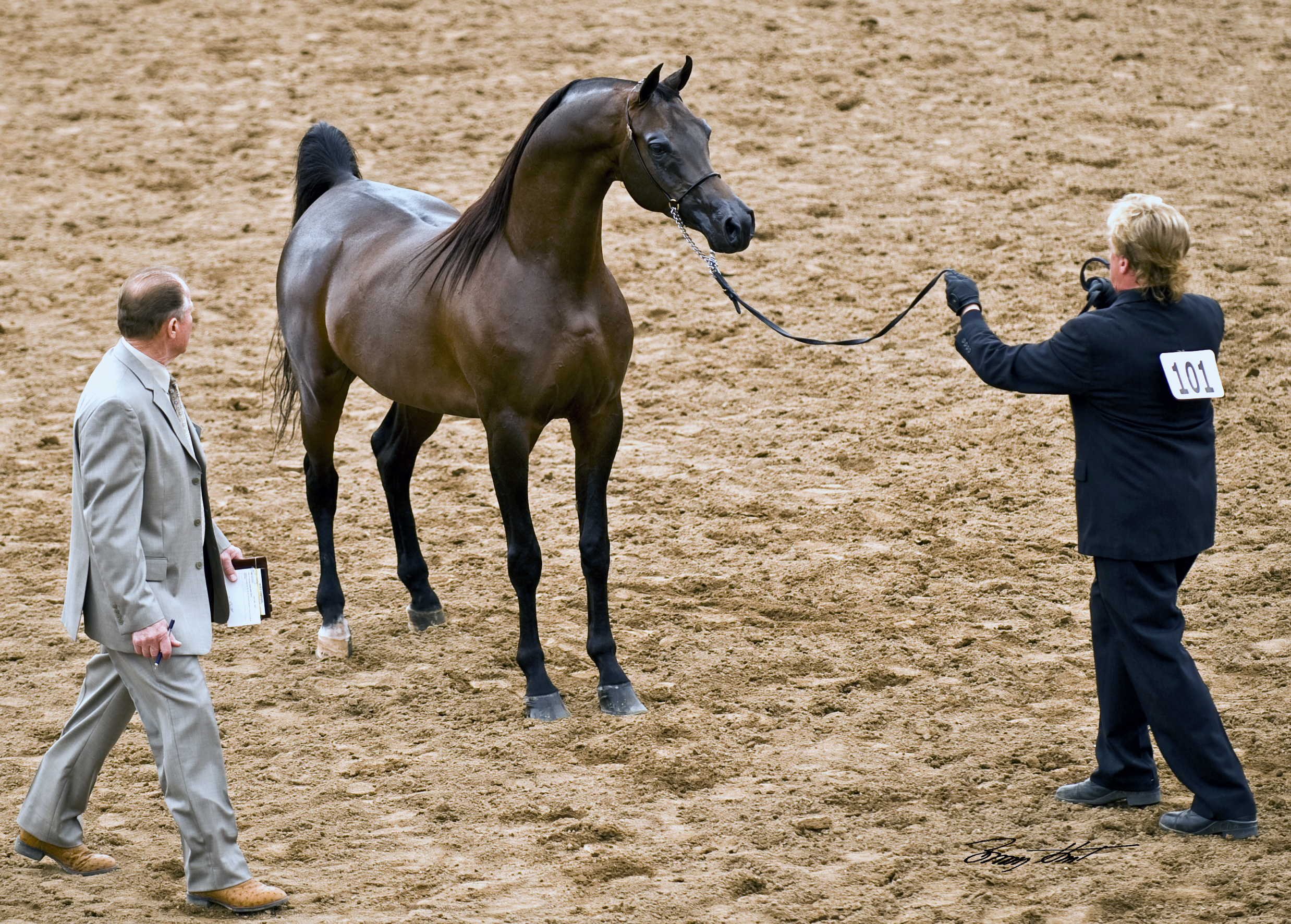 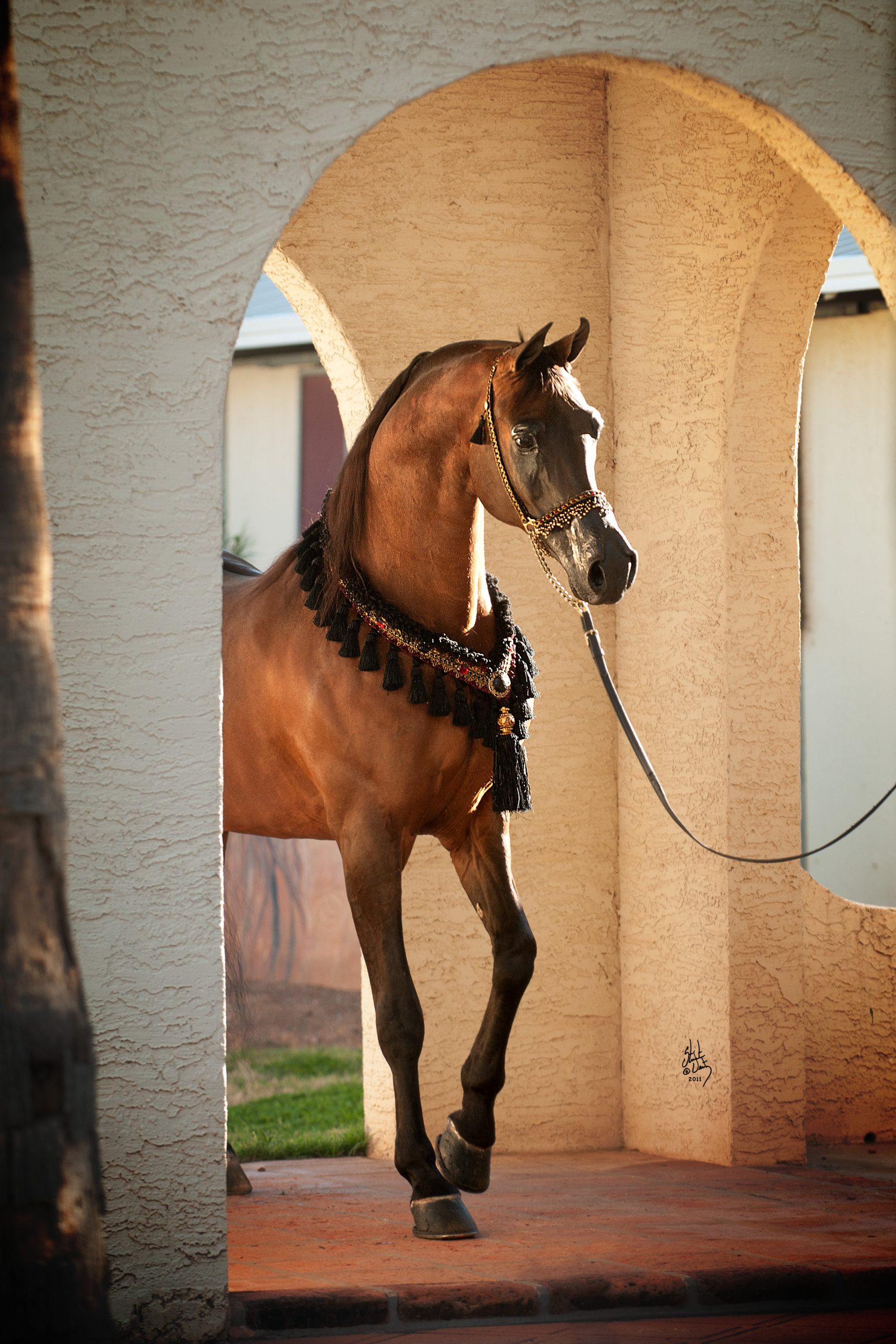